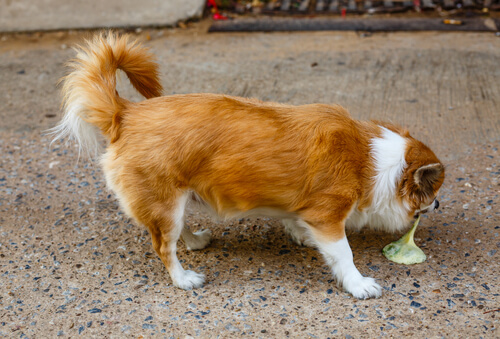 Vomiting in dogs can be as worrisome to owners as unpleasant to pets. Clearly, vomiting in dogs can have many different causes and can indicate a wide variety of conditions. Keep reading to have more information about this common problem.

Dogs vomit for many reasons. Some of them are serious, while others are not a cause for concern. Thus, learning to notice the difference can be complicated, but it is essential to make sure you seek veterinary care as soon as necessary.

An important thing to keep in mind is that dog vomiting and regurgitation are not the same.

Differences between vomiting and regurgitation

The vomit may contain yellow bile or partially digested food: it usually smells sour, from heartburn. In addition, vomiting may occur hours after eating. The act of vomiting implies arcades with evident involvement of the abdominal muscles.

On the other hand, in the cases of Regurgitation, the expulsion of undigested food occurs smoothly: it is a passive act, without arcades. It usually happens shortly after eating and the act does not require an obvious effort.

While dogs vomit for many reasons, gastrointestinal problems are perhaps one of the most common reasons to vomit. These problems may include:

Other pathologies that may occur with vomiting in dogs

Vomiting can also be a sign that something more serious is happening. For example, vomiting may be a secondary reaction in inflammatory bowel disease, in kidney, liver or pancreatic conditions, as well as intestinal cancer.

It should be noted that vomiting may also indicate a neurological problem., such as a problem in the middle ear, a brain tumor or even meningitis.

There may even be psychological causes, such as extreme fear or anxiety, similar to what happens in a person.

The consistency of vomiting in dogs

By observing the vomit we can realize its consistency. In the case of being able to distinguish what the pet has consumed, it is said that he has vomited undigested food. In case of not distinguishing the content, and if it looks creamy, it is said to be granular. Additionally, the vomit may be mostly aqueous or liquid.

The color of vomiting in dogs

How liquid vomit is different

In general, liquid vomiting, whether yellow or transparent, is a sign of a completely different medical problem that has no connection to the food consumed.

Often, the fluid that occurs in vomiting comes from organ disorders such as kidney, liver, pancreas or severe gastritis. It requires medical attention.

Although there are dogs that tolerate the trip well, there are cases in which they become very restless, they begin to feel bad, dizziness begins, and even vomiting. Read more “