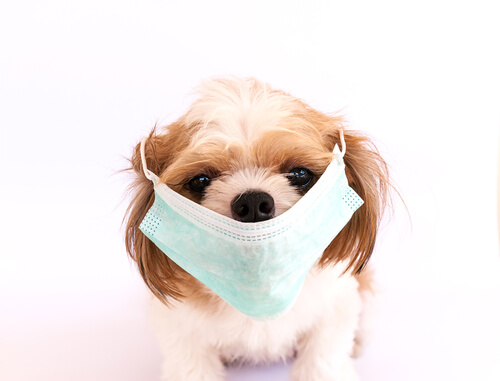 As a dog owner, knowing the most contagious canine conditions is on your list of duties. Only from the opportune information we can act correctly to guarantee the best state of health of our pet.

Medicine always advances, both for humans and animals. This means that many of these diseases are no longer as frequent as they once were.. Even so, we must be aware of any disease to which our pet may be exposed, whether in the dog park, in the nursery or elsewhere.

1. Canine distemper, the first of the most contagious canine conditions

This is a viral disease of the respiratory tract – also known as distemper– which is considered the leading cause of death in dogs due to infectious disease. The virus that causes it is from the same family as the measles virus, the paramyxovirus. Despite having a vaccine against the virus, the disease has not been eradicated and remains a latent risk.

The disease is transmitted by bodily secretions. It presents with gastrointestinal upset, upper respiratory problems and then affects the neurological system, after which dogs may have seizures and die.

In the list of the most contagious canine conditions, parvovirosis cannot be missed. This viral disease is very serious and rapidly evolving, and it has a 90% mortality rate in untreated dogs. Fortunately, there is a highly effective vaccine.

The infection is severe diarrhea, vomiting and regurgitation, which can lead to dehydration and death. The virus is transmitted orally, through fecal or oral transmission.

This disease is caused by the canine influenza virus H3N8. It spreads very similarly to human flu, when coughing and sneezing.

It is currently a controlled disease. It occurs in animal shelters and not in the general population. There is a vaccine, which generally applies to the population at risk.

This disease is bacterial; It is transmitted by contact with the urine of infected subjects. It should be noted that this disease can be spread to humans. The microorganism first infects the mucous membranes or skin wounds and then passes into the blood, a stage that can last 4 to 12 days. Then it invades the renal epithelium and hepatic parenchyma.

Leptospirosis is a disease that can manifest itself in acute or chronic form. It is treated with antibiotics. Signs of leptospirosis vary from dog to dog, but may include fever, vomiting, thirst, jaundice and frequent urination or lack of urination.

It is a viral disease. The infection can be deadly in puppies, although dogs of any age can be affected. This virus can establish latency, so dogs can have it for life.

It is common in kennel kennels, where many have a positive test without having suffered major symptoms.; It can spread the virus to other dogs. It is spread by nasal and oral route, as well as transplacental and venereal.

Older dogs may have a mild fever or respiratory problems, but otherwise, herpes could go unnoticed.

There is a vaccine in the United Kingdom. It is recommended to prevent the infection of puppies by keeping newborn puppies warm.

Rabies is a well known viral disease and vaccination was so good that it is common to forget this deadly disease. It is important to remember that rabies is 100% in people, which is why we have to be careful and make sure to keep animals with the updated rabies vaccine.

The disease is spread through a bite of an animal that carries the disease, while dogs that are in contact with wild animals are at greater risk.

It is important to note that if a dog bites a person, and there is no evidence that the dog has been vaccinated against rabies, a quarantine period of the animal or even euthanasia may be necessary.

Mortal diseases in cats and dogs are one of the main concerns for their owners. What are they? How to identify them? Read more “