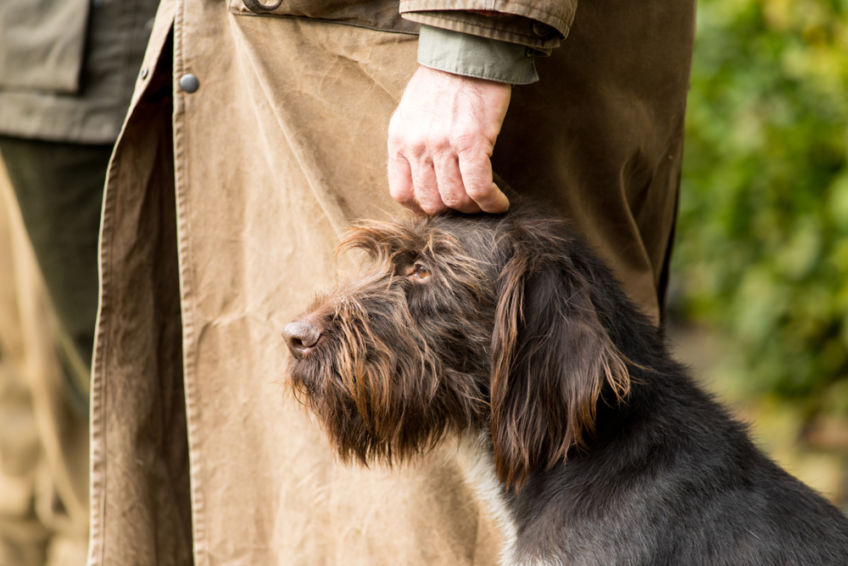 GERMAN SCREWED HAIR – Facts| Height | Origin | Weight | Size – The German wirehaired pointer is a large, elegant, medium-sized hunting dog. Gifted with a great sense of smell, with a strong hunting drive. He is intelligent and a bit stubborn. Very active and durable.

The German wirehaired pointer is a confident, balanced dog, but with a high temperament. He is energetic and endowed with great hunting passion. On a daily basis, calm, changing beyond recognition – he becomes a relentless dog, stubborn and completely absorbed in work.

A representative of this breed will submit to the owner if he can impose his will on him without resorting to violence and will take care of his mental and physical development. If a man proves to be a weak and inept guide, this pointer willingly takes control in the family.

When the need for movement and activity of the German wire-haired pointer is unsatisfied, this dog may be disobedient, hyperactive, run away on walks or destroy objects. He gets along well with children and is a great companion to play with. However, due to its size and mobility, it can be hardly attentive, which is why it’s better to supervise its contacts with children.

He can share the house with other dogs, and he usually doesn’t conflict with strangers, but when he is attacked, he will definitely defend himself. Strong hunting instincts mean that an adult dog may not accept smaller pets, such as a cat or rabbit. Also on walks, the pointer will be happy to hunt small animals.

German wirehaired pointer requires a lot of movement and exercise. He is a dog created for action, he hates boredom and inaction. Walking on a leash is not enough – he should be able to run freely for an hour or two every day. It’s best if you go with him to the meadow or let him train in the water.

The German wirehaired pointer is a versatile dog. As a result of breeding selection, a durable hunter helper was obtained, working both before and after the shot. This dog works perfectly in dry terrain, in water and in swampy areas – eagerly searches for animals in inaccessible thickets or thick rushes and retrieves gunshots. The strong and muscular construction makes it very resistant to harsh terrain. An excellent swimmer and retriever, thanks to his robe he can work in the reed for hours.

He is dominated by the low and low wind, thanks to which he perfectly hunts down small animal shootings and works without difficulty with the dyed hunt of large animals as a mountain hound. And although the German Shorthaired Pointer surpasses him in the lightness and speed of gaits and in the hardness of the stand-up collar, it certainly will not match him at work in water and in the woods.

Every dog ​​of this breed used for breeding – in addition to the required grades from shows – must pass tests to check the innate and acquired characteristics of a hunting dog. These include no fear after the shot, search method, stand-up (stopping in a characteristic pose after weathering the game) or a tendency to work in the water. Usable qualities representatives of this breed can also present at work pointer competitions, which include: work in a dry field trials, field and water work before and after a shot (multilateral pointer competition), work in the field, water and forest before and after a shot (versatile pointer competition).

According to the FCI (International Kennel Club), the German wirehaired pointer is a breed subject to work trials, which means that to obtain the title of International Beauty Champion (CIB), in addition to the results at exhibitions, a diploma from a pointer work competition is required (the dog must obtain a minimum of 70%. points). The German wirehaired pointer is endowed with a strong guarding instinct, and with proper training he can also prove himself as a defender.

The German pointer is intelligent, likes to learn and willingly works with people. Hunters value him for independence and independence, but on a daily basis these features can cause problems for less experienced owners. Therefore, from a puppy, it is necessary to establish the rules of functioning of the dog in the family and to comply with them consistently.

It is also important to properly socialize the little pointer and learn basic obedience. We start training at the age of three months (you can use classes at a dog kindergarten). We teach a puppy to walk on a leash and loose, sit down, lay down, etc.

We place great emphasis on learning how to return to a command. It is worth using a special whistle for this purpose, thanks to which it will be easier to summon the dog in the open, when they have gone a long distance (a representative of this breed usually behaves like this when lowered on walks).

At the age of 4-5 months, we familiarize the pointer with the field and water, we also slowly begin to learn to retrieve (the dog should not chew or nibble the retrieve). Initially, young dogs present only a visual stand-up, e.g. playing with kinsmen or displaying pigeons. Exposing animals to the nose occurs later and depends on the dog’s temperament, his mental maturity and his familiarity with the fishery.

Who is this race for?

German wirehaired pointer is a dog for active people who like contact with nature. He requires training, consistent upbringing, a lot of movement and appropriate activity that will allow him to discharge his energy. Most dogs of this breed remain in the hands of hunters. This breed is not recommended for the city or for people not interested in using it in hunting.

German wire-haired pointer – what is it like? Learn its pros and cons!

The German wirehaired pointer had to cope with the tasks set before it regardless of weather and terrain conditions, therefore it is inherently strong, resistant and durable. It tolerates both high and low temperatures well. It does not require protection against the cold, especially when it is in motion. In the summer – as with any dog ​​- you need to watch out for overheating and take care of the water in the bowl.

Currently, the breed is rarely harassed by health problems, because most breeding cares for prevention and proper selection of animals for breeding. However, like any dog, a pointer may be exposed to some medical conditions and injuries. In dogs working in the field or in the forest mechanical injuries occur, e.g. injuries to paws, ears or tail.

Hip or elbow dysplasia may occur, which is why most breeders examine their pupils in this direction, although this is not required. Because of the deep chest, representatives of this breed are sometimes exposed to enlargement and torsion of the stomach.

Pointers are not picky and usually have a good appetite. The diet must be adapted to the quadruped’s lifestyle. During training and hunting, dogs need high-energy foods rich in protein necessary for building muscle mass. In contrast, animals that do not have enough movement should be given regular food (with a moderate content of protein and fat) so as not to lead to excess weight.

When choosing dry food, pay attention to its composition, especially the ratio of calcium to phosphorus and the addition of supplements that affect the structure and regeneration of articular cartilage. If we want to prepare food for the pointer ourselves, we must supplement it with appropriate calcium and mineral preparations, preferably after consulting a veterinarian or an experienced breeder. The daily portion should be divided into at least two meals and keep the dog calm after eating.

The correct coat for a German wirehaired pointer is easy to clean and does not require trimming. It is waterproof and dries quickly after swimming or other wetting. Moulting in these pointer is moderate. Avoid choosing puppies with a long, soft, silky or woolly coat that is not compatible with the pattern and is more troublesome in care because it tends to be felt and tangled. This garment requires trimming 3-4 times a year to improve quality. If the coat is woolly and soft, it is easy for sticks, Velcro, mud and various types of dirt to stick to it during hunting. In the winter, however, snow easily adheres to such hair, loading the paws, which makes it difficult for the dog to work.

After eating, it is advisable to dry the beard with a towel, and once in a while it is worth washing it, because the longer hair accumulates food residues and germs. Intensive work in the water, however, entails the need for greater care for the ears, skin and fur.

The we can take a dog for walks in a leather or material collar and on a double leash (adjustable in length). To take a puppy, cotton cords, rubber balls or toys to retrieve from water will work best. You can also give natural chews, e.g. smoked ears or beef masseuses.

This breed was bred at the turn of the century, according to the plan of Siegfried Hegewald. His intention was to create a breed of hunting dogs, characterized by sharpness, strong character, work efficiency – both in the field and water, as well as in the forest – as well as a rough coat, stiff as a wire, resistant to harsh terrain and weather conditions.

When the breed was created, the focus was mainly on performance features and structure, and the hair was treated as a minor matter, which in turn led to great freedom in the hair of German rough-haired pointers. It is almost common that puppies of various hair are born in one litter: from long and soft hair like in Gryffindors, to short and close-fitting as in German Shorthaired Pointer. The best representatives of this breed can be found in Germany, as well as in the Netherlands and Croatia.

This breed enjoyed great popularity among Polish hunters in the 1960s, 1970s and 1980s. Then followed a collapse and currently the population of this breed in Poland is not very numerous.

According to some researchers, the name “pointer” comes from the Hungarian “vizsla” and simply means a hunting dog. Others, in turn, say that it was the opposite and that Hungarians borrowed the word from the Slavic languages, where it is widespread. “Pointer” probably comes from the word “wyga”, which originally meant “the one who howls” and then adopted the meaning of “old, experienced dog”, later extended to human. In any case, the pointer could have meant a dog who would voice inform about finding prey.

Today, however, the most typical feature of this group of races is a stand-up collar, i.e. the ability to display their prey through freezing. Continental pointer do it in a standing position, unlike some British ones that do it lying down (hence the other name of this group of dogs – the leg).