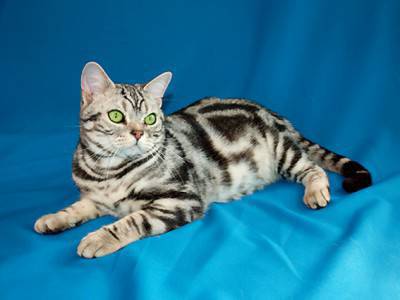 The American Shorthair o American short-haired is an American breed that descends from cats brought aboard the sailing ships of European colonists in the seventeenth century.

The cats subsequently adapted very well to weather conditions of North America. The breed was therefore selected naturally by the common cat crossed with other breeds such as the British Shorthair, the Burmese and the Persian. The American Shorthair appears for the first time in the breed register in 1904 with the specimen that was called “Buster Brown”, the result of a cross between a British Shorthair and an American short-haired cat. Only in 1966 the breed came officially recognized with the current name. It is a rare cat in Europe which however is highly sought after in Japan.

Standard: It is a cat that varies from medium to large size, ranging from 3.5 to 7 kg. Of robust constitution, the American Shorthair is slightly longer than the height. There head it is medium in size, round and wide and has a slight concavity between the forehead and nose. The muzzle it is square but not too short as well as the chin accentuated. The ears they are medium in size and are not too broad at the base, with rounded ends. The eyes they are wide and round and spaced apart, with the color matching the yellow to green or orange coat. Even the neck it is of medium length and is muscular. The body it tends to be square with the chest and shoulders developed mainly in males. American Shorthair has one solid musculature widespread. The legs are of medium length and i feet round. Finally the tail it is not too long and is quite heavy at the base, while the end is rounded. The tail is usually brought to the same level as the back.

In any case, it is a rustic cat that does not need much care.

Coat and fur: I’m all natural colors allowed from black, red, white, blue and cream, with or without stripes or white spots. The typical coat and the Tabby mind the Chocolate , lilac or colourpoint are not allowed.

Character: American Shorthair has a character balanced, calm it’s a lot fond to the master. It is a type of breed friendly who loves play and do physical activity so he loves to be outside to devote himself to hunting.