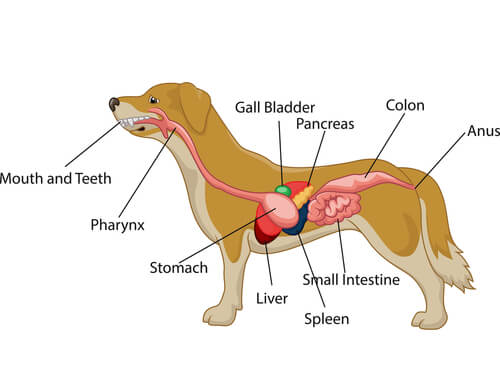 Stomach cancer in dogs is one of the most lethal diseases, both because of the aggressiveness of the symptoms, and because of the poor effectiveness of the treatments. However, identifying the signs of this condition in its early stages can extend the life expectancy of those affected.

Despite being one of the most serious pathologies, statistics show its low representativeness in the group of canine neoplasms, less than 0.5%. Even so, it is convenient for pets to follow a preventive healthy lifestyle, as a poor diet can lead to their appearance.

Stomach cancer in dogs is more common among different varieties of Belgian shepherds, the Flanders boyboy, the chow chow, the akita or the keeshond. The control of these races should be more exhaustive, especially if chronic gastrointestinal disorders are observed.

Types of stomach cancer in dogs

Although there are different varieties of gastrointestinal cancers, they all have a symptomatology and a prognosis of high severity.

Stomach cancer in dogs is characterized by a symptomatology of vomiting, anorexia and weight loss. Blood vomiting, expulsion of black feces due to the presence of degraded blood, anemia, lethargy, bloating and abdominal discomfort may also appear.

In general, disorders associated with gastrointestinal tumors usually coincide with those of chronic gastritis, hence the complexity of diagnosis.

The correct determination of the disease usually occurs when it is highly developed, which makes the treatment of the animal difficult. The urinalysis, blood and feces, abdominal x-rays after ingestion of contrast substances and ultrasound to detect inflammations are part of the identification protocol. In cases of dissemination to other organs, an endoscopy may also be necessary.

Except in cases of lymphoma, most often the tumor is removed. Once practiced, the veterinarian will guide the type of diet that best suits the degree of deterioration suffered, for which he will assess whether the weight loss has been very drastic.

Usually, It is usually this low weight that leads to the weakening of the animal’s immune system, which combined with an advanced age tends to advance death.

Even if genetic predisposition is one of the most important factors When developing the disease, prevention always tends to reduce its incidence. Therefore, following an adequate lifestyle with the necessary food and exercise will contribute to improving the quality and life expectancy of the dog.

It is very important to act soon when colon cancer is suspected in dogs. The causes are not known yet, but certain factors can cause it. Read more “