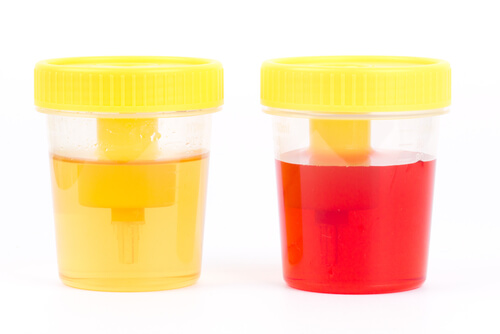 When blood appears in the urine of the dog or any other animal, we talk about hematuria. This presence does not have to be visible to the naked eye and, sometimes, they are only detected in specific urine tests. Then it is defined as microscopic hematuria. If we clearly see the reddened urine, we will be faced with a case of macroscopic hematuria.

Bleeding through the urine can appear for multiple reasons, almost all of them pathological. That is, in no case is the presence of blood in the dog’s urine normal and the cause should always be sought. If you detect that your pet is urinating blood, go to a veterinary professional as soon as possible.

Most common causes of blood in the dog’s urine

In most cases, when the presence of blood in the dog’s urine is evidenced, the system that is usually affected is the urogenital. However, the failure may be in blood clotting or even be the result of an underlying disease. The most common causes of hematuria, both microscopic and macroscopic, are:

Colonization by bacteria at any level of the urinary tract can cause the presence of blood in the urine due to inflammation and congestion in the area. On the other hand, certain parasitosis, such as ehrlichiosis or leptospirosis, have hematuria among its possible symptoms.

The development of stones or kidney stones appear when there is an excess of substances such as calcium, oxalate or uric acid that the kidney cannot expel and accumulate forming crystals. These crystals can remain in any part of the urinary tract, from the kidneys to the bladder, and damage the inner lining, which causes bleeding.

Neoplasms, both benign and malignant, are abnormal growths of masses in some organ or tissue. For example, prostatic hyperplasia, hemangioma or hemangiosarcoma usually causes bleeding.

Inflammation of the different organs of the urogenital system

Inflammatory processes, whatever their character, are the cause of a localized increase in temperature and irrigation, which can cause, in certain cases, the rupture of the vessels and their subsequent bleeding. A non-pathological example is vulvar swelling that female dogs suffer when they are in the proestrous stage of heat.

Uncastrated female dogs, when they reach an advanced age, have a damaged uterine wall. This facilitates colonization by bacteria to form, finally, a serious infection that, if not corrected surgically, will end the life of the animal. Pyometers can cause bleeding through urine through blood from the reproductive system.

Accidental consumption of certain poisons causes changes in the patency of the kidneys. This could excrete red blood cells. In addition, it ends with a renal failure that kills the dog.

Symptoms that may accompany hematuria

Blood in the dog’s urine is not a symptom that appears only because, as we said before, it always derives from another condition or condition. Therefore, when red blood cells are detected in the urine, it is accompanied by changes in other measured parameters.

Usually, when hematuria is due to blood problems, other types of bleeding usually appear, such as epistaxis – nasal bleeding – or bleeding from the mucous membranes.

Problems in the urogenital system, depending on its nature, can cause:

How to avoid blood in the dog’s urine

If the dog contracts a disease, develops some type of neoplasm or problems arising from age appear, we must focus on fighting them. Nevertheless, certain infections and some pathologies can be prevented through a nutritious diet and proper hydration, In addition to avoiding certain states such as obesity.

Urine infections in cats are more common than we think. However, there are things we can do to avoid them. Read more “

Acute diarrhea treatments in cats?
Stomach cancer – What to do if they detect it?
Advertisement
Advertisement