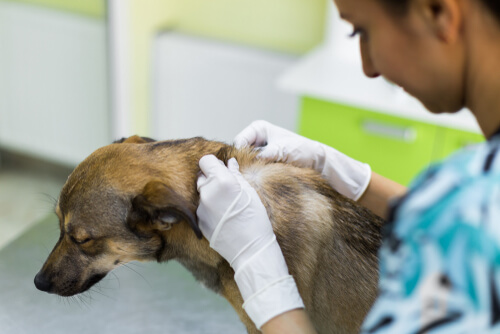 Pendular fibroids in dogs are benign and relatively frequent tumors, particularly in older animals. Its name is due to the fact that they are made up of relatively mobile nodules that have a peduncle or stem by which they are attached to the tissues.

Characteristics of pendular fibroids in dogs

It is common to observe that fibroids appear as several very well defined nodules. They have a variable consistency and, not being adhered to deep planes, are relatively mobile. In these benign tumors the skin that covers them does not have hairs and usually does not present ulcerations.

The stem or peduncle is formed by loose connective tissue that contains blood vessels covered by a normal or thickened epidermis. In cases where the pendular fibroid suffers from torsion of your pedicle, it is possible that the nodule may have partial or total necrosis.

In relation to the body areas, they can appear in the layers of the skin, in any area of ​​the body.

Causes of pendular fibroids in dogs

The causes that induce the formation of tumors are unknown. It is obvious that the dog’s skin is continually exposed to a wide variety of agents of chemical nature and lesions of different origins. Aggressions to canine skin range from UV radiation to viral infections.

Additionally, other factors such as various hormonal abnormalities, and even various genetic factors, can also influence the appearance of tumors. So, As the years progress, the accumulated damage to the skin increases the chances of a neoplastic proliferation.

No wonder then that the most common tumors in dogs are skin and subcutaneous tissues. In fact, these they represent approximately one third of all tumors found in the canine species.

Diagnosis of tumors in dogs

It is useful to understand that the skin is made up of different layers, so there is a possibility that each of them can develop tumors of different characteristics.

Primarily, tumors appear as small lumps or bumps, but they can also have different appearances. Because skin tumors can be very diverse, identification and accurate diagnosis is a task that only a veterinarian can perform.

Distinguishing between a benign tumor and a cancerous tumor requires specialized knowledge and laboratory equipment. A veterinarian can perform a fine needle aspiration of cells or a biopsy – which removes a small amount of tissue from a tumor – for microscopic evaluation.

Treatment of pendular fibroids in dogs

Fibroids – being benign – are not invasive, which means they do not spread to other areas of the body and are easy to remove surgically.. Unlike these types of tumors, those that are malignant can spread to surrounding tissue and spread to distant organs. Consequently, malignant tumors cause damage to the animal.

In general, for benign tumors that are not ulcerated and that do not impair the normal routine of the dog, treatment may not be necessary. This may be the most prudent option, especially in older dogs. However, complete surgical removal is recommended if they change their appearance or enlarge.

The appearance of fibroids according to the races

Fibroids occur in all breeds, but they are considered primarily as tumors of old dogs. The breeds doberman, pinscher, boxer and golden retriever have a higher incidence of fibroids. In these races the head and legs are the most likely sites of appearance.

It is recommended to be aware of the appearance of any lump that protrudes on your dog’s skin. You should observe its shape, if it is a single nodule or are several, if the skin that covers it is intact, if it has hairs or not or if it has any ulcer

Although we believe that the hair is sufficient as protection, a dog can have skin cancer and this cause more serious consequences. Read more “