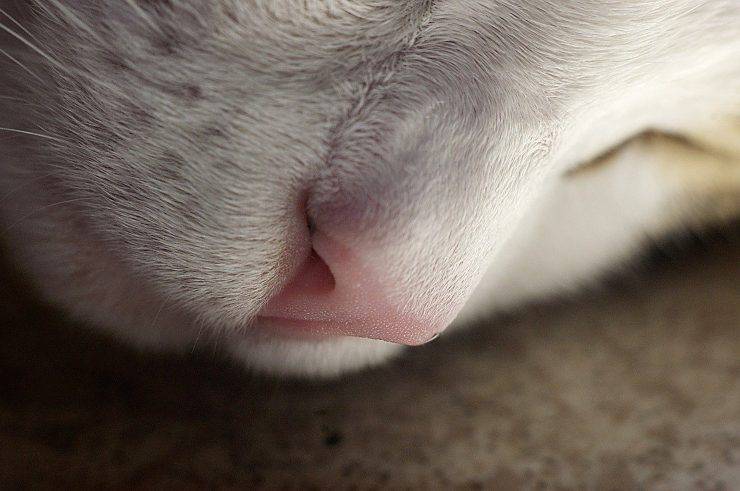 Nose cancer in cats is less frequent than in dogs but not impossible. Let’s see the causes, symptoms and treatment of this pathology.

Cancer is a term used to describe a disease caused by a malignant mass, this mass is made up of a set of atypical cells of the body that grow and divide without any control in this sense cat nose cancer refers to the overgrowth of a malignant tumor in the animal’s nose.

It is important to be able to recognize symptoms early, in order to effectively treat our pet’s disease domestic applying treatments recommended by the veterinarian.

Cause of nose cancer in cats

In most cases of cat nose cancer, it is not clear what the cause of cancer development is in them. It is assumed that it can be caused by excess sun or some chemicals that can be considered carcinogenic. But from various studies some cats are believed to have a genetic predisposition to develop certain types of cancer, such as nose cancer.

Nose cancer in the cat, before the cat can experience the symptoms listed below, it can be present in the body of the animal, for a maximum of five years.

The most frequent symptoms of nose cancer in cats are:

Just based on the symptoms just described, if you suspect that the cat may be sick, do not waste any more time and take it to the veterinarian, who will make a first visual diagnosis that will certainly not be enough to establish the disease with certainty but subsequently he will apply the necessary exams.

The diagnosis of nose cancer in cats can be determined through blood tests, such as a complete blood count known as CBC, aspiration of a lymph node, the execution of one chest x-ray to rule out lung tumors, an MRI or a tomography, likewise one tumor biopsy.

Cancer treatment may differ depending on the type of cancer, the place, the presence or absence of metastasis, the quality of life of the cat, the age of the cat or the equipment available to the specialist. The treatments provided for nose cancer in cats, in fact, are three because they are complementary to each other, they are: surgery, radiation therapy and chemotherapy.

In the presence of tumor surgery, it is the first form of treatment for the sick cat, as with it it goes to eliminate the malignant mass present in the body of the cat. THEthe veterinarian will decide whether it is useful to proceed with the total elimination or to proceed with the partial assisted by chemotherapy or radiotherapy.

Radiation therapy consists of external radiation towards cancer cells, with the aim of killing them but unfortunately also destroys healthy cells. The treatment lasts from 3 to 5 weeks. The most frequent side effects are vomiting, nausea, hair loss and skin irritation, which can be controlled with the use of medications.

Chemotherapy are drugs used to kill diseased cells from the body. Unfortunately, chemotherapy drugs do not know how to differentiate benign cells from sick ones, and this is precisely the reason why hair falls out in people undergoing chemotherapy.

Furthermore, it is not always able to cure cat cancer, but it can slow down its progression and improve its quality of life. There are several types of chemotherapy drugs that can be used based on the type of cancer the cat developed. Chemotherapy is typically used in combination with surgery and / or radiation therapy.

Chemotherapy can be administered in several ways: