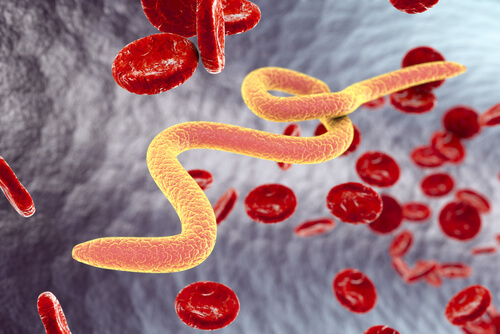 Canine dirofilariosis is one of the most lethal diseases of pets, which is why it has been the subject of multiple scientific studies. Currently there are effective preventive treatments essential to ensure the welfare of the animal.

Canine Dirofilariosis is a cardiopulmonary disease caused by the nematode Dirofilaria immitis, commonly known as ‘heartworm’. This parasite is located mainly in the right ventricle and in the pulmonary artery of the host, although it can migrate to other areas of the body in the most serious cases.

In addition to Dogs, cats, wolves, foxes or ferrets are also susceptible to the disease. The transmission of the parasite is vector, through a mosquito belonging to the genera Aedes, Anopheles or Culex, among others.

Thus, the mosquito ingests the microfilariae that it will later transmit to the dog through the corresponding bite.

In the early stages of the disease the animal will not show any apparent symptoms. However, once one or several years have passed since the infection, the dog will experience the following disorders:

Despite receiving the relevant preventive treatment, dogs should undergo an annual check to detect a possible infection. The effectiveness of heartworm medications is very high, but it must be administered strictly, because omitting a single dose can put the animal at risk.

Infected dogs of Dirofilaria immitis they may have about thirty worms in their hearts, so that the greater the number of these, the more severe the symptoms.

Likewise, the diagnosis will be more conclusive the greater the course of the disease and there is an obvious symptomatology. The physical exams, x-rays, ultrasound and different types of blood tests they will be necessary when corroborating the infection.

The lethality of canine dirofilariosis makes it essential to carry out adequate prophylactic treatment. There are both oral and topical options or through injections, each with a certain frequency of administration. All these medicines work by eliminating the immature larvae of the heartworm, which includes the infectious larvae deposited by the vector mosquito, as well as the next larval stage.

After a period of approximately 51 days, immature larvae will pass into an adult phase against which preventive treatments are ineffective. Due to the short life cycle of this parasite, it is essential to strictly comply with the number of doses prescribed by the veterinarian.

In the event that the dog has been infected, one type or another of protocol will be established depending on the degree of development of the disease and the associated symptomatology. Although asymptomatic cases are the most likely to succeed, the severity of the disease does not have to be associated with the severity of the symptoms. In fact, the sickest dogs with the highest number of worms may be the ones that show less evidence of infection.

Canine dirofilariosis is one of the pathologies that has caused the most deaths in domestic dogs, which has a global impact. However, it is precisely this impact that has allowed an extensive study of it, being rewarded in effective preventive treatments for animal health.

Oral flea treatments can be an easy and effective alternative to ensure the health of the animal against possible parasites. Read more “