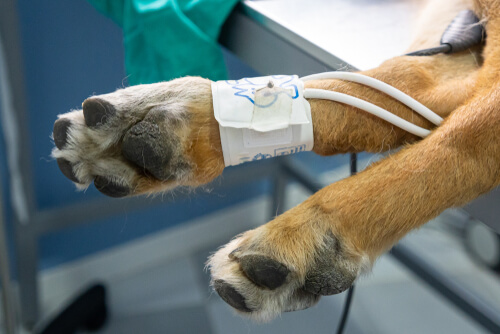 Symptoms vary depending on the severity of the condition. The following are just some of the most common symptoms that dogs with high blood pressure show: convulsions, disorientation, blindness, dilated pupils, retinal detachment or hemorrhage of the eye.

Can also be presented blood in the urine, protein in the urine, bleeding from the nose, swollen or shrunken kidneys, as well as heart murmurs. There may be weakness, either on one side of the body or on the legs and involuntary swinging – balancing – of the eyeballs.

So how frequent is this form of hypertension? Certainly, it is not known, and the values ​​found vary widely in different studies. The guide prepared by the American College of Veterinary Internal Medicine (ACVIM) recognizes that between 0.5 and 13% of dogs suffer from high blood pressure. The ages of dogs with hypertension ranged from 2 to 14 years.

Secondary hypertension, which represents 80% of all cases of hypertension, may be due to a variety of factors, including obesity, kidney disease, hormonal fluctuation and hyperthyroidism.

Diabetes can also be a cause of hypertension., although it is uncommon in dogs. If you suspect that your dog is suffering from hypertension, go to the office so that your veterinarian can provide an adequate diagnosis.

Blood pressure is often measured in pets in the same way as in humans. An inflatable bracelet will be placed on the dog’s paw or tail, while standard blood pressure measuring instruments will control the pressure. It is important to keep the dog still long enough to get an accurate reading.

Generally, five to seven measures are taken. The first measurement will be discarded and the level of excitation of the dog during the procedure will be taken into account. If the results are very different, the procedure should be repeated.

Priorityly, It is necessary to establish the treatment of the underlying cause of high blood pressure. Otherwise, the dog should probably take medications to control blood pressure indefinitely.

The medication of choice is a calcium channel blocker or a beta blocker. As for the dog’s diet, the veterinarian may recommend foods low in sodium.

Blood pressure should be monitored regularly.; Your veterinarian may order some laboratory tests to measure your dog’s reactions to the medication.

The diagnoses of heart failure in dogs are increasing, mainly affecting adult patients of middle or old age. Read more “