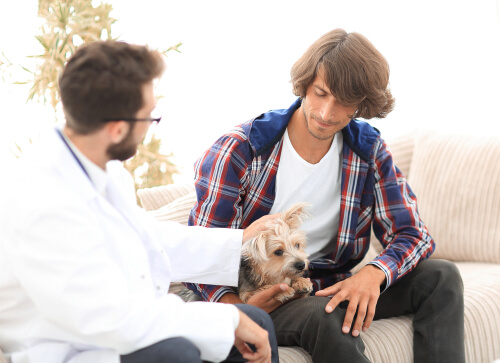 The thyroid is a small gland, characterized by being butterfly-shaped and located in the neck region. It may not work properly and develop diseases such as hyperparathyroidism. This disorder affects different animals, including the dog and the cat.

In the dictionary of the National Cancer Institute, hyperparathyroidism is defined as «a parathyroid gland condition – four pea-sized organs found in the thyroid – produce too much parathyroid hormone. This causes loss of calcium in the bones and a higher concentration of calcium in the blood. Symptoms include bone pain and kidney problems.

The parathyroid glands are small in size and have an essential role in maintaining calcium concentration. The glands secrete parathyroid hormone (PTH), whose function is to increase the amount of calcium in the bloodstream. In addition, this hormone acts in the intestines, bones and kidneys.

However, one of the main missions of parathyroid hormone is the induction of hydroxylation of vitamin D at the renal level. When activating vitamin D, a cascade of reactions is triggered; proteins that regulate the absorption of intestinal calcium are activated.

The disease is classified as primary when it is a functional disorder of the parathyroid gland.. The main consequence is an abnormal secretion of large amounts of parathyroid hormone.

It seems that the main cause of the development of primary hyperparathyroidism is due to the presence of solitary adenomas. However, sometimes the presence of carcinomas and hyperplasias has also been mentioned.

Before hypersecretion of PTH, calcium is reabsorbed in different regions of the body. And, as a result, it results in hypercalcemia.

Hypercalcemia, in turn, results in alterations in different regions of the body. For example, in the kidneys, lower urinary tract, at the heart level, etc.

On the other hand, there is secondary hyperparathyroidism and it is subdivided into two classes. This is developed as a homeostatic response generated by low values ​​of ionized calcium in the blood.

Secondary renal hyperparathyroidism is caused by a decrease in plasma calcium concentration. In addition, it represents an increase in PTH secretion and a decrease in glomerular filtration.

Secondary nutritional hyperparathyroidism is defined as a metabolic disorder. This disorder is caused by an excessive and long-term release of parathyroid hormone.

In both types of hyperparathyroidism calcium has an essential role. Calcium is a mineral that fulfills an essential mission in the body as it is a structural component of bones and teeth.

On the other hand, calcium also fulfills another series of functions. Among them is acting as an intracellular messenger and participating in the processes of blood coagulation and muscle contraction.

How does hyperparathyroidism affect dogs?

In general, it is strange that dogs suffer from this disease and, even more difficult, that it occurs in cats. Normally, those affected are elderly animals or with a certain age.

Depending on the symptoms present in the animal, the prognosis may be more favorable or less. The most general symptoms are: polyuria (increased need to go to the bathroom), incontinence, muscle weakness, vomiting or tremor. The moment a kidney infection is detected, the prognosis worsens.

When diagnosing the disease, one of the tests to be performed will be a routine blood test. It will allow to confirm if the patient suffers from this disease and the state in which he is.

According to the diagnosis obtained, the veterinarian may decide which treatment to apply. If a hypercalcemia has been detected, the treatment must be immediate even if the cause of it is unknown.

In the case of a parathyroid tumor, the veterinarian may suggest two options. Either perform a surgical removal or a less aggressive option such as ethanol ablation. Depending on the size of the tumor, the professional will choose these or the previous options.

After performing the operation, the veterinarian will monitor the level of calcium in the blood. Sometimes, After the operation the animal may develop hypocalcemia. One way to reverse it is by administering vitamin D and calcium.

Keep in mind that, depending on the time it takes to make the diagnosis, the treatment will vary. Above all, the veterinarian will control possible sequelae at the renal level that may have occurred.

In the growing season is when calcium has a greater relevance for our dog. It is vital that it is included in your daily diet. Read more “