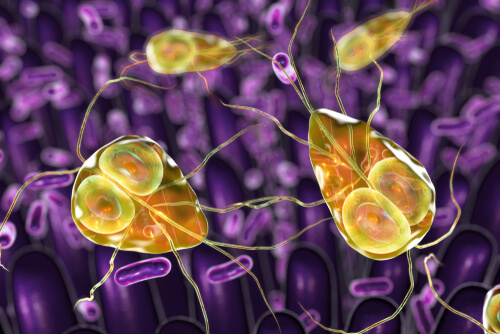 Giardia in dogs is a very common parasitic protozoan pathogen among domestic animals. It also has a high prevalence in humans from underdeveloped countries and can be fatal in children in these regions.

Contents hide
1 Causes of giardiasis in dogs
2 Symptoms of giardia in dogs
3 How to know if your dog has giardias?

There are different species of giardias, but the most common is Giardia lamblia, also known as Giardia intestinalis, because it lodges in the intestine of mammals. To differentiate them it is necessary to carry out genetic analyzes, although, occasionally, they can be distinguished through an electron microscope, an unusual device in small animal clinics.

The prevalence of this parasite in our pet may be higher than we think, since sometimes the dog does not develop any symptoms. This is one of the reasons why the systematic deworming of our dogs is recommended periodically.

Causes of giardiasis in dogs

Giardia is a single-celled eukaryotic organism that has flagella – structure that some microorganisms have to move around – and that parasites certain mammals, usually causing diarrhea.

The life cycle of giardia is composed of two stages. The first is a cyst or egg phase, which enters an organism by ingesting contaminated water, feces or raw food. This cyst is very resistant and can survive in the environment for a long period of time; And it can be kept in the fur of a dog.

During the second stage, the parasite develops to its adult form in the small intestine and, once there, releases its eggs. A dog can become infected with giardias when eating feces from an infected dog, playing or interacting with another dog, sniffing or licking the perianal area, etc.

Symptoms of giardia in dogs

Giardia in dogs can be asymptomatic. That is, a can can ingest the cysts, become infected but not develop the disease. Thus, they establish themselves as asymptomatic carriers and can pass giardiasis to other animals.

On the other hand, most dogs do have characteristic symptoms of intestinal parasitosis, such as:

Diarrhea in dogs may be due to many other factors, even more common than giardiasis. Therefore, given the appearance of these symptoms, it is better to see a professional.

How to know if your dog has giardias?

First, if your dog started to develop diarrhea, either sporadically or recurrently, it would be time to visit the veterinarian. The reason for this symptom could be caused by something you have eaten, multiple diseases, parasites of many types, foreign objects in the digestive tract, stress, intestinal dysbisosis, etc.

The veterinary professional will perform an anamnesis and a detailed exploration of the dog to determine the possible causes. If other reasons were ruled out, I could finally perform an ELISA test to determine the presence of giardias if the optical microscope could not see anything. The expulsion of giardias through feces is not continuous, so it is advisable to perform the test several days in a row.

In any case, It is always advisable to deworm your pet, internally and externally, periodically, especially in those regions where the presence of certain parasites is practically endemic, as is the case with leishmania or filaria in coastal areas.

Domestic animals live with parasites of all shapes, sizes and complexity, but are there single-celled parasites? Read more “