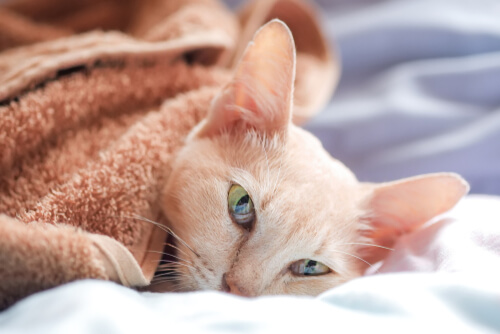 Epilepsy and seizures in cats are not a unique disease, but a set of idiopathic disorders – without known cause – or symptomatic. The latter can be caused by multiple causes that include infections, neoplasms or brain tumors, trauma, metabolic problems or genetic origins.

In felines, epilepsy has not been as widely studied as in humans. Therefore, reference is usually made to the International League against Epilepsy, which studies human epilepsy, to define it:

“A disorder of the brain characterized by: a lasting predisposition to generate epileptic seizures and the neurobiological, cognitive, psychological and social consequences of this condition. The definition of epilepsy requires the appearance of at least one seizure ”.

Later, in 2014, ILAE and the World Organization for Animal Health (OIE) decided to declare epilepsy as a brain disease that is defined under any of the following conditions:

Currently, there is still no classification of epilepsy in veterinary medicine. For this reason, the classification provided by the ILAE is applied to define epilepsy and seizures in cats.

Causes of epilepsy and seizures in cats

Treatments of epilepsy and seizures in cats

Treatment for epilepsy and seizures in cats will depend at all times on their cause., provided that this is known. Therefore, it is essential to make a thorough study of the case and use all possible resources to find out the origin of the attacks.

To treat a crisis itself, suppositories of diazepam are usually applied, among other drugs. It should always be done under strict veterinary control for its possible adverse effects.

By last, There are specific diets for epileptic cats; Some of them are already formulated and can be found in the market. They are based on an increase in the fatty percentage of the food that seems to help reduce possible epileptic seizures.

The color of cats depends on their genes. Not all white cats are deaf, but they are likely to be according to their genetic inheritance. Read more “