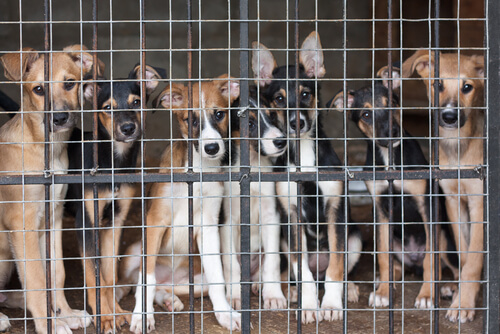 All pet owners ask ourselves: should all pets be spayed and neutered at the same age? Recent studies have revealed that choosing the right age to castrate or spay a dog may not be so simple.

Contents hide
1 The benefits of neutering or spaying a dog
2 When a pediatric dog is neutered or spayed
3 Is there an ideal age to castrate or sterilize a dog?
4 The case of large dogs

The benefits of neutering or spaying a dog

This benefit is greater than the associated risk of having certain problems – other types of cancer and orthopedic problems – present in the population of dogs undergoing gonadectomy.

When a pediatric dog is neutered or spayed

This is the case when the procedure is performed at a very young age, as young as two or three months of age.. Commonly, this happens in rescue situations in animal shelters. In this case, the objective is to control the growth of the canine population.

In this scenario, it is imperative that pets relocated through these organizations no longer contribute to the overpopulation of pets. Once adopted, compliance with spay or neuter commitments is only 40%. Because of this fact, neutering or sterilizing a pediatric dog, before adoption, is reasonable.

It is necessary to note that this practice pursues population control and combat the problem of animal suffering and public health. There are doubts about the safety and long-term effects of the procedure at an early age. This is so despite the considerable literature on the subject, some of which are contradictory.

Is there an ideal age to castrate or sterilize a dog?

The risks and benefits of gonadectomy associated with age are an area that continues to evolve. No doubt, as new information becomes available, the current recommendations will be reviewed and reassessed.

In males who are castrated when they are older, the risk of some types of cancer and orthopedic problems is reduced. However, behavior problems may have to be addressed.

The case of large dogs

A recent study on the association of gonadectomy age and performance, conducted in 450 dogs trained as service animals, determined that the following ages as optimal for gonadectomy:

In short, after analyzing all the pros and cons, The recommendation is to follow the practice of neutering or spaying a dog between five and six months of age For most dogs.

As with anything, there are exceptions to each rule and we urge you to discuss all problems and concerns with your own veterinarian to make the best decision for you and your pet.

Helping shelters that adopt animals is an excellent way to put our grain of sand against animal abandonment. Read more “

What are the Causes of halitosis in dogs ?
Health problems associated with obesity in dogs and cats
Advertisement
Advertisement