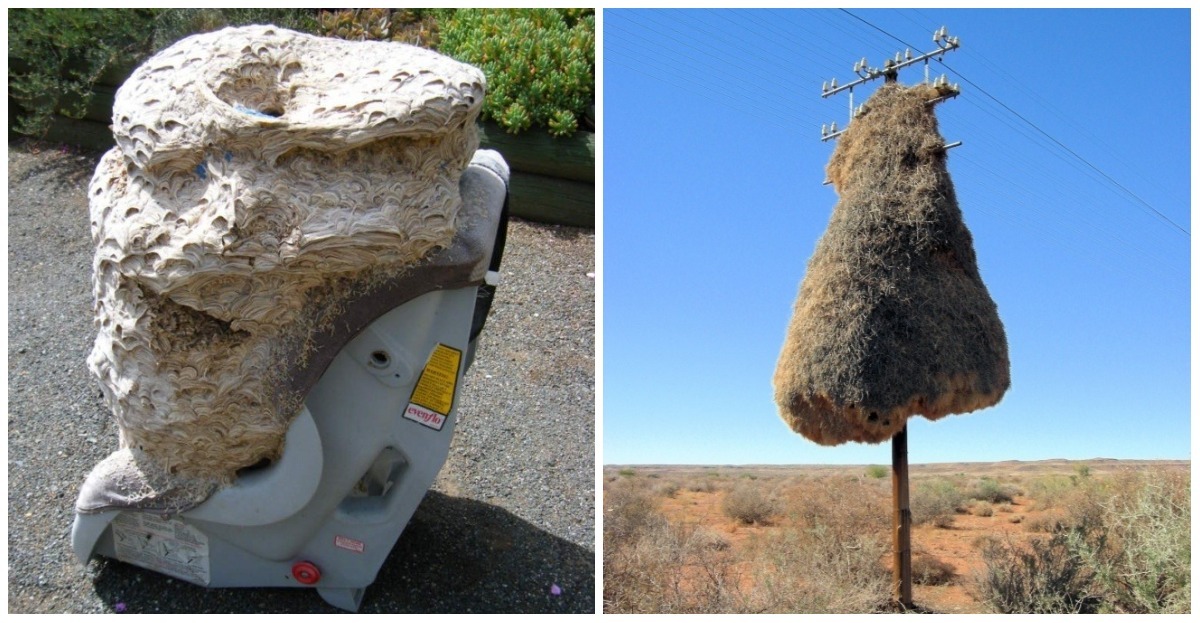 Who is not sensitive to works of art? Available in all genres, art necessarily attracts and educates each of us. And if you still thought it was human, know that you are wrong! Indeed, in nature, some animals also shape extraordinary works, perhaps even without knowing that they affect us. Often these edifices are used as temporary or temporary shelters, but we cannot help but marvel at such a spectacle.

Here are 17 breathtaking animal creations you may not even have known existed! Of course, this list is not exhaustive and you can completely complete it in the comments!

1. These trees trapped in canvas These photos were taken in 2010 in Pakistan. The country was beset by torrential rain. Many areas were flooded and many insects died. Some then found refuge in height. At first glance, specialists thought that the spiders were the instigators of these giant canvases in the trees. But on closer inspection, they realized that it was actually an alliance of several insects, whose moth larvae for example ! And if we compared our Egyptian pyramids with these termite mounds, would we be in excess? Termites are excellent masons ! That said, they do not live in these masterful constructions. These are only used for protect insects from outside threats and also allow a better oxygenation of real nests.

These regular and aesthetic mounds have been observed repeatedly at the bottom of the oceans, especially near japan. After several years of trying to understand these drawings on sea sand, scientists have finally found out who was behind them. This is the male puffer fish. He swims near the sand and flippers to shape the geometric shapes incredible. But he does not do this for pleasure, indeed, this ritual serves him for seduce his female ! The more the patterns are complex and regular and the more likely the male is to wobble the heart of his beautiful. Most of the time, wasps use wood fibers and their saliva to build their nests. But they may also use any other material, if they find it appropriate. They then drop a little saliva and scrape off the very fine fibers that emerge from it. Only the queen can decide to build a nest, because she is the one there lays eggs. In one of the images, you can admire a multicolored nest. This is the result of an experiment conducted by Mattia Menchetti, who provided colored paper to a colony of wasps for use in the construction of their swarm.

5. The mud wasps of wasps The eumenes, also called pottery wasps, are independent but tvery protective when it comes to their babies. In order to feed their larvae, they build tubes out of mud which serve as a prison. They then deposit between 20 and 30 insects (spiders, flies, butterflies …) and put their eggs on it. Finally, they close these little nests with mud and check daily that everything is going well, until the little ones are big enough to get out on their own.

6. The cocoons of the tricoptheras The peculiarity of tricoptheras lies in the fact that they are larval stage sailors and terrestrial once adult ! They build their shelters with what they find in their nearby element. So it can be stones, grasses, shells, sand, etc. They don't start construction until pupa, in order to protect themselves from predators. The weavers are from little colorful birds living in community in one nest. Resembling species of hanging baskets, their habitats can weigh up to a ton, sometimes breaking the trees or poles on which they are installed. Nests communicate with each other via galleries. They generally welcome several generations and are very well refrigerated since the temperature is there 10 ° C cooler than the outside air ! Swallows are birds that also live in community. They often come together in colonies, consisting of several nests. They are carefully made, and their shape is similar to a basket or cornucopia. To build them, they use mud and their saliva. In India, China and Indonesia, their nests are much admired, and sometimes even revered. Have you ever wondered what an anthill looks like? An American biologist spilled boiling metal in an anthill hole, so you can take it out of the ground and see what it looked like. The result is simply incredible. The structure ant colonies is very complex and organized. Sure each branch arrives a room and each room has a specific function. Red warblers are beautiful little red birds. They build their nests thanks to clay, grass and mud. They take the traffic light shape and can weigh up to 5 kg. This bird can realize 2,000 flights just to fetch clay to build a nest! This termite species is not named for nothing. Indeed, they build their termite mounds in a very particular way: the widest part is always to the south. This allows them to control the temperature in their habitat. The building can reach up to 3 meters high and the eggs are always at the ideal temperature for mature properly. Each termite hill can receive 2 to 3 million eggs ! This is one of the most beautiful natural wonders. It is not completely natural since it is the work of microorganisms. It covers some 350,000 square meters of the planet and continues to grow. This area is larger than some countries! Scientists say the construction of the coral reef started some time ago about 400,000 years, but this data seems controversial.

13. The nests of Baya weavers The nests of Baya weavers are very special. They are in pear shape with a growth down. They can measure up to 60 cm long without the growth, who she can measure up to 45 cm long. compounds blades of herbs, it is the fact that they are dried by the sun which gives all the solidity necessary for the nest. The male takes care of the construction and entry is through the tube. From time to time, an entire colony may build a huge nest.

14. The anthill of red ants The red ants are real architects, because they are able to build giant anthills, worthy of an animal-level skyscraper. These little ants are known for but also to transport up to 40 times their weight. The anthill is composed of 2 parts : the first is underground and the second earthly. The visible part is the most important, because it has the function of protect the underground part waters and various predators.

15. The anthills of Australian weaver ants

Australian weaver ants only needa day to build their anthill. It is not in the ground, but in leaves ! It is through teamwork that they achieve their goal, by putting in chain, they grab a sheet on both sides and hold thanks to their jaws. The larvae make silk thread to maintain and close them.

The cradle bird is a romantic in the soul. The male makes offerings to his female (berries, beetles, sticks, flowers, etc.) by placing them in front of their nest neatly. Some even pick up lost toys or other devices to beautify their nests and make the females succumb. These buildings are not designed only to attract females, but they never welcome the whole family.

17. The precious larvae of phryganes

In 2015, on the occasion of the exhibition Slip of the Tongue, French artist Hubert Duprat, unveiled the result of a very special experience. He took larvae of the snails from their natural habitat and transported them to his workshop. He has replaced small stones and other materials composing their cocoons, by small gold nuggets, rubies, pearls and some sapphires. Above, the result of his experience.