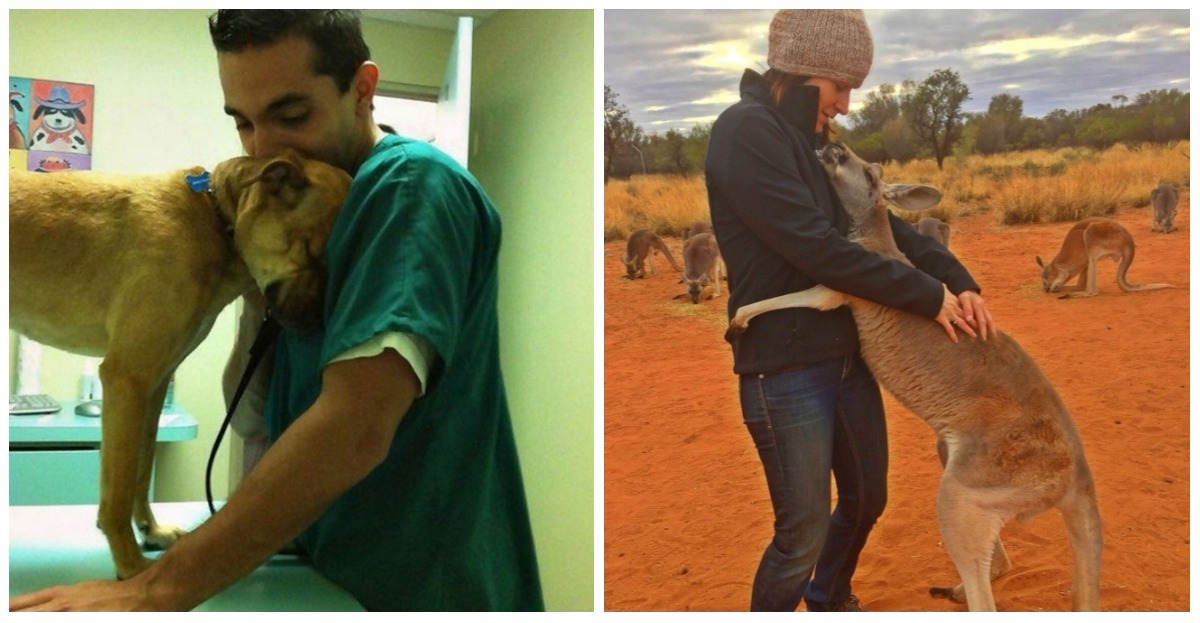 Empathy is a feeling you have for others, but also for animals. And it’s this same feeling that drives us, humans, to rescue an animal that is injured, in bad shape or on the verge of death. If from man to man we thank each other with words or hugs, animals cannot. But they still know how to be very grateful.

1. Bella the squirrel, saved by a family

In 2009, a small squirrel injured by an owl ended up in the garden of Brantley Harrison and his family. They immediately took care of the little beast and named it Bella. For 5 months, they treated her, gave her food and drink, and put her back on her feet. But Bella being a wild animal, when the family recovered, the family release… Heartbroken, they thought they'd never see her again, but Bella came to visit them every day until it turns off. It lasted 8 years!

2. The super-veterinarian saved the life of this dog

These are small innocuous gestures for us, but which mean a lot to them.

3. Swans can also be grateful Usually considered aggressive and mean, swans do not have a good reputation. But when one of them got stuck in a fence, Richard Weeze did not think for a second and decided to save him. Injured, the swan first tried to wrestle, but quickly realized that the man wanted no harm. Once released, Richard took the animal in his arms to care for him and the swan wrapped his neck around that of his rescuer, as if he thanked him …

4. Another heartfelt thank you from a dog to his veterinarian 5. A deer that says thank you in its own way A few years ago, this family saved this deer, while it was the prey of a hunter. Since then, the animal has visited the family regularly to show its gratitude. Calmly, he approaches a window of their house and waits for the family to wake up to be petted and ask for a little piece of bread.

6. Marvin, the dog rescued from the animal shelter where he was to be euthanized 7. This deer comes to say hello and thank you regularly Amscolie is a lady who takes care of orphan animals. One very cold and stormy day, she found 3 baby fallow deer comfortably installed in the living room ! She forgot to close the back door of her garage and they took advantage of it to infiltrate. She kept them warm until the storm subsided and they could come out safely. Fallow deer keep coming to visit him often ! This little guy's name is John. Amscolie found him when he was very weak and had a selenium deficit. John is in excellent health today and is very happy to cuddle with his "human mom". Abigail was only 5 months old when she was abandoned by her mom. Rescued by specialists, she was transported to the Alice Springs reserve. Since then, she has shown her gratitude to her rescuers by making them hugs… Here is baby Abigail, who was already showing his gratitude by hugging the caregivers.

9. The beaten dog who rebuilt thanks to a baby

Nora was a dog beaten by its former owners. Their cruelty defied anything you can imagine … Wounded to death, she was neat in an animal shelter. Nora was definitely terrorized by humans. A family decided to adopt it, touched by its history. The pregnant mother gave birth to a baby boy named Archie. It is the only one Nora has complete confidence in. These two are totally inseparable.

Since then, the family has grown: it now has 4 dogs, 3 cats and 3 children.

10. Even the wildest animals can be loving In a jungle raid, Brazilian soldiers found a very bad baby jaguar in the Amazon rainforest. They took it with them and looked after it. This animal has grown up with humans and has never known nature. Local officials have accepted that the soldiers keep the animal in their barracks under more than close surveillance. Jiquitaia is today neither more nor less that a big cat who loves humans and keeps on thanking them, because she owes them their lives.

Rademenesa was 2 months old when she arrived in a very serious condition at the animal shelter. She couldn't breathe. She hung on and with the care she received, she managed to live. Since then, it has become a assistant more than useful, because she goes around sick animals received at the refuge and every day, spend time with them, purr with them and take care of them.

12. Saved from a fire, this dog became a firefighter When Jake was still just a puppy, he was trapped by a fire, in the barn in which he lived. 75% of his body was burned. He received all the necessary care and was put back on his feet, but its owners did not wish to recover it. The firefighter who saved his life was informed and adopted Jake. Since then, he has become a firefighter, like his master! 14. It's always those who have the least who give the most This young boy lives on the street and sells small objects in an attempt to support his daily life. Despite everything, he gave his stray dog ​​his jacket, to protect him from the cold.